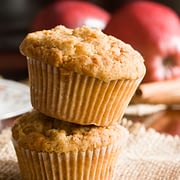 These moist apple muffins are packed with juicy apples and topped with a crunchy brown sugar streusel topping! They’re really easy to make, too. Perfect for a fall breakfast with a hot cup of coffee! 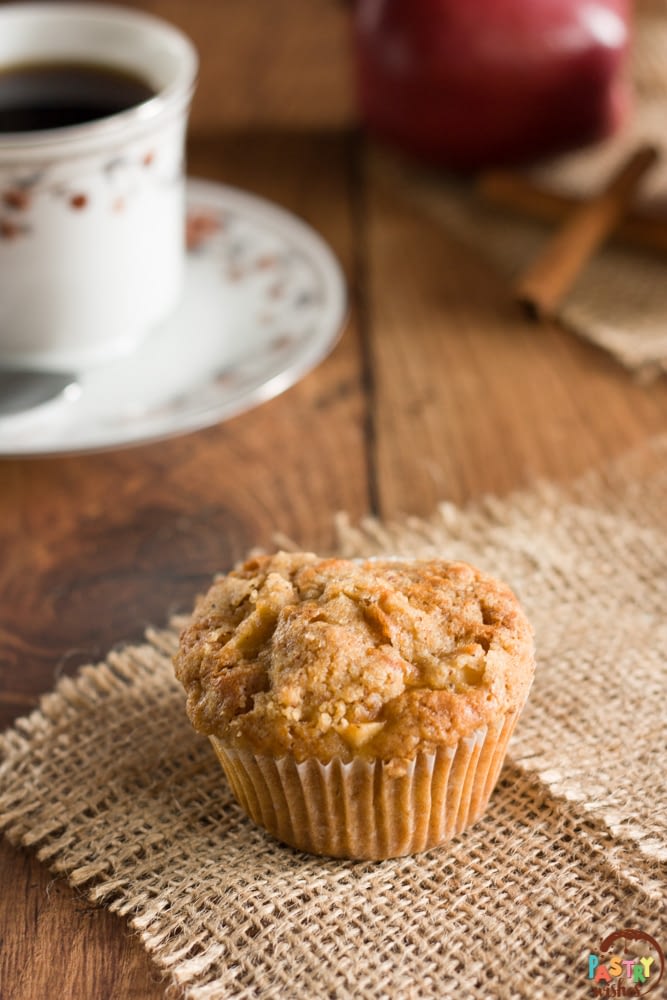 Don’t you just love a delicious muffin with a nice hot cup of coffee in the morning?  These streusel top apple muffins are to die for! They’re great with coffee or on their own!

And I absolutely LOVE baking with apple and cinnamon! It just makes the whole house smell so good!

These muffins are guaranteed to satisfy ALL your muffin cravings! 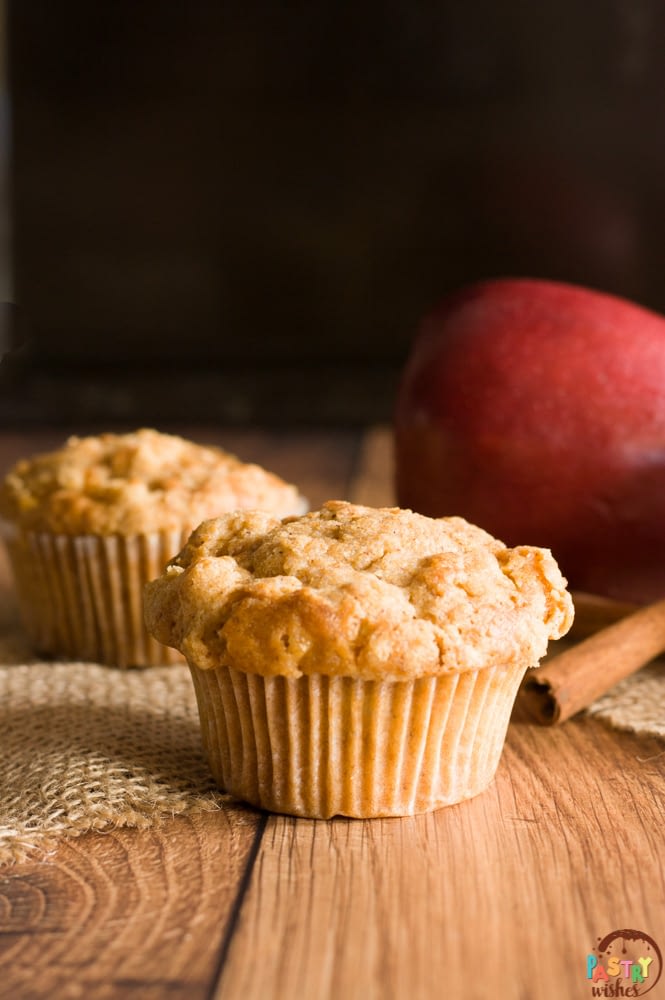 They’re so simple to make and it’s all made by hand – you don’t need a mixer. 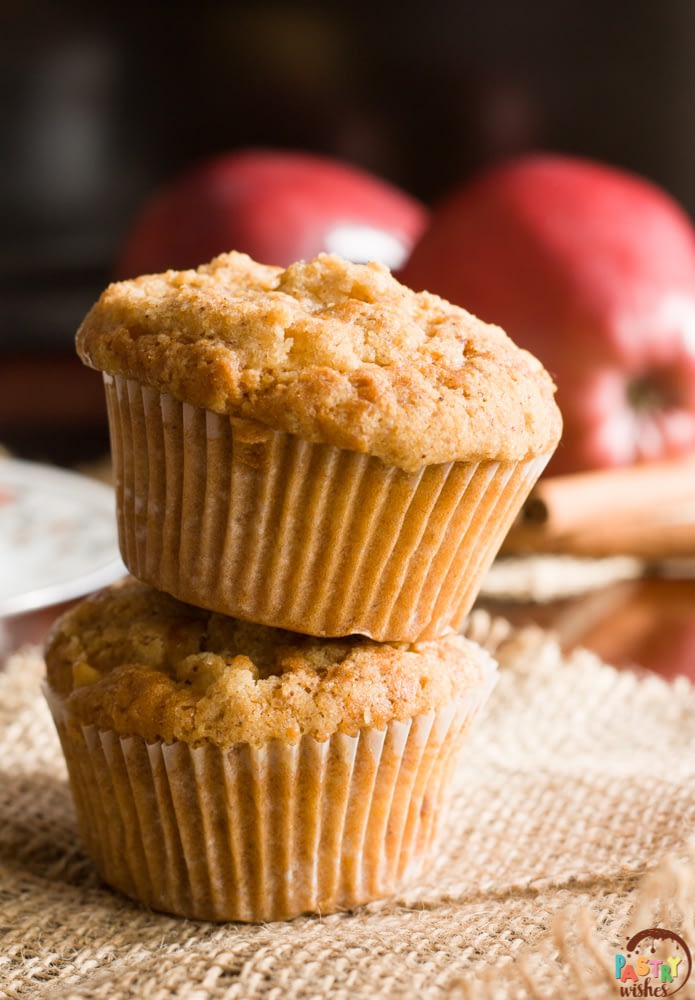 You only need a few basic pantry ingredients to make these muffins:

Each ingredient is important in its own way:

Sugar: I use a combination of packed brown sugar and granulated white sugar. The brown sugar gives a nice caramel touch which really compliments the apple and spices. Brown sugar also adds moisture and helps keep the muffins moist longer.

Spices: I use ground cinnamon and ground nutmeg.

Leaveners: I use both baking powder and baking soda, because I wanted to add more lift to the muffins since I added the topping. Both leaveners also help to give the muffins that cute little dome!

Salt: I always use a bit to boost all the flavors.

Egg: I use 1 large egg. I found that using more than 1 egg for this recipe tends to make the muffins a little drier.

Milk: I use fresh low fat milk, but you could use full fat milk. I’m not sure of how nut milks would affect the overall flavor, but I’m guessing it wouldn’t make that big of a difference.

Apples: I use Gala apples because they’re sweet. I don’t really like tart apples, but you could use your favorite apple variety for this recipe.

Butter: I use unsalted butter. If you want to use salted butter, just omit the salt from the recipe.

How to make streusel top apple muffins in 6 easy steps:

Whisk together the dry ingredients.

Whisk together the wet ingredients.

Gently fold in the chopped apples.

Sprinkle the muffins with the topping and bake.

4 WAYS TO MAKE THE STREUSEL TOPPING:

These are 4 different ways I’ve used to make the streusel topping. Use whichever method works best for you!

This is the fastest and easiest method. Just put all the ingredients in a food processor and pulse until the mixture becomes crumbly.

You can mash all the ingredients together using a fork until the mixture is crumbly.

Just like the fork, you can also use a pastry blender to cut the butter and mash everything together until it’s crumbly.

You can use your fingers to rub the butter together with the other ingredients until it looks like coarse crumbs. 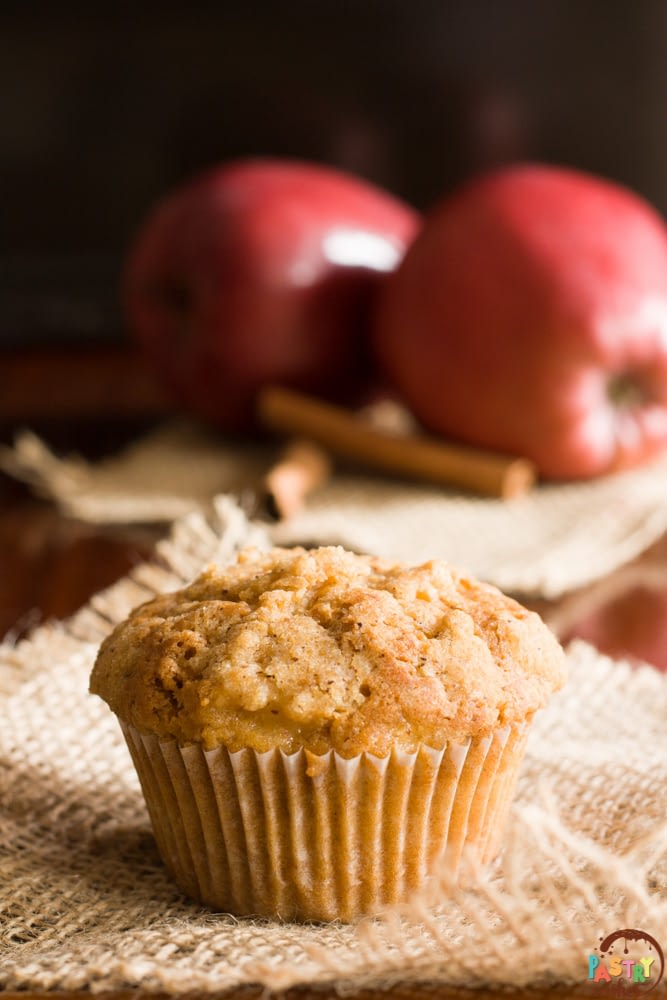 Let me know how these streusel top apple muffins turn out for you in comments below! I’d love to hear from you!

For the streusel topping 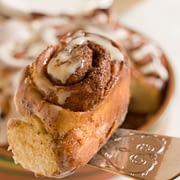 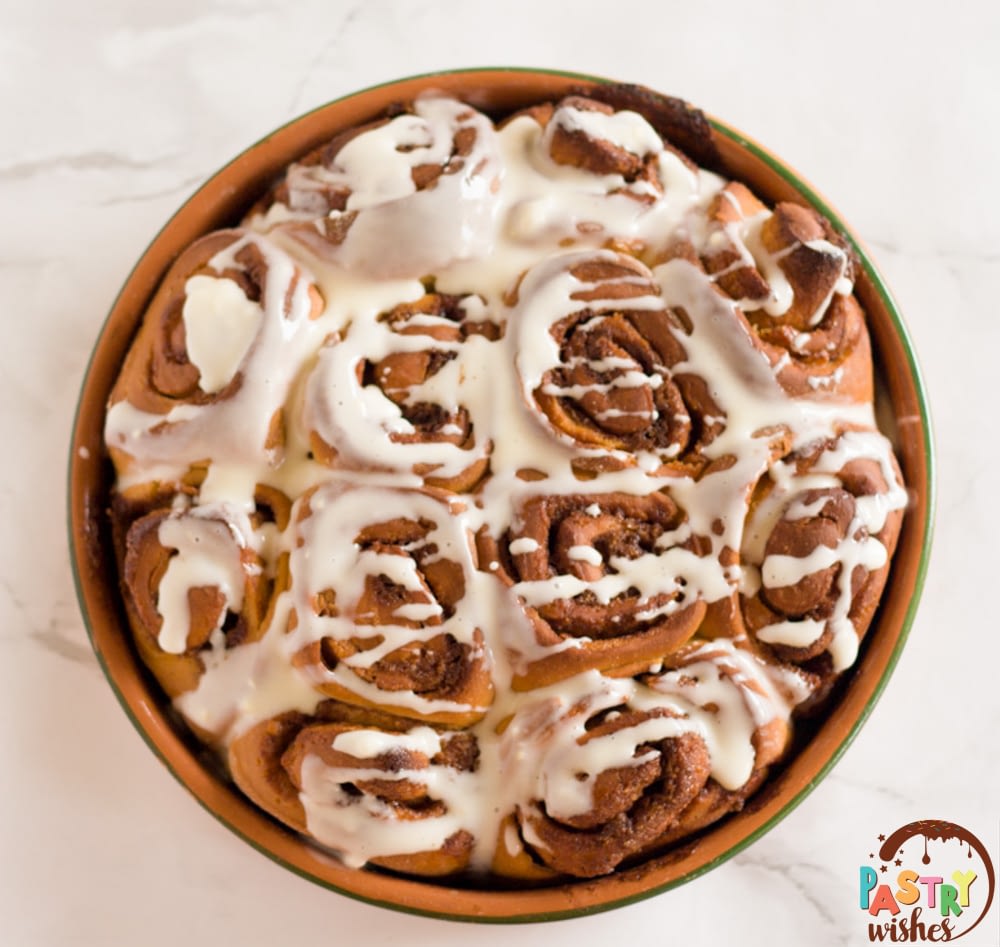 I love making cinnamon rolls! There’s something therapeutic about kneading the dough by hand and watching it rise!

If you haven’t made cinnamon rolls at home before, don’t feel intimidated! It really isn’t complicated at all. I think the most difficult part is waiting for them to cool down when they come out of the oven!

And the amazing aroma that fills the kitchen…OMG, pure bliss!

This recipe is straightforward with plenty of tips. I also offer a few make-ahead options, too.

How to Make the Best Cinnamon Rolls from Scratch in 8 Easy Steps:

Simple, basic ingredients is all you need for the dough: flour, yeast, sugar, salt, milk, butter & 1 egg. You can use a stand mixer or knead by hand for about 5 minutes. I love kneading by hand!

Mix the softened butter, sugar, and cinnamon together.

After the dough has risen, lightly grease your work surface with oil and roll out the dough into a rectangle. Spread the dough with the cinnamon sugar filling and then tightly roll it up, starting from the bottom. Cut into 10 – 12 pieces, (the number of pieces will depend on how large your rectangle is).

Place the pieces in a pan, about 2 inches (5 cm) apart and let them rise again (for about half an hour). They should have doubled in size.

Mix the powdered sugar with some milk or water, adding more liquid if necessary. Drizzle over the cooled rolls. 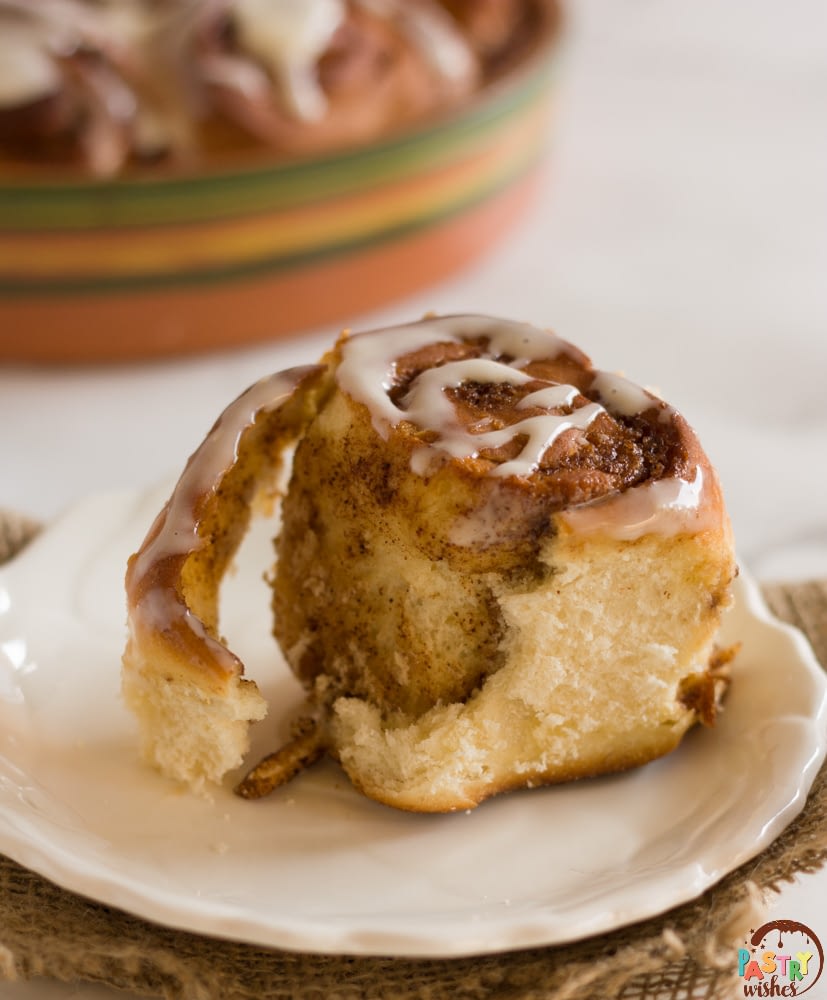 THREE WAYS TO MAKE THE FILLING:

There are different ways you can easily make these cinnamon rolls in advance, just make sure they are tightly covered so they don’t dry out.

Put the rolls in a pan, cover, and refrigerate overnight (you don’t need to wait to let them rise first). The next day, you’ll see that they have risen nicely! Let them rest at room temperature for about 10 minutes (you can do this while preheating your oven). Then uncover them and bake as directed.

Want to save the cinnamon rolls and bake them later?

Here are 2 easy ways and you don’t need to let them rise first!

Cinnamon rolls can be frozen for up to a month. To bake, let the rolls thaw at room temperature overnight and then bake as directed. 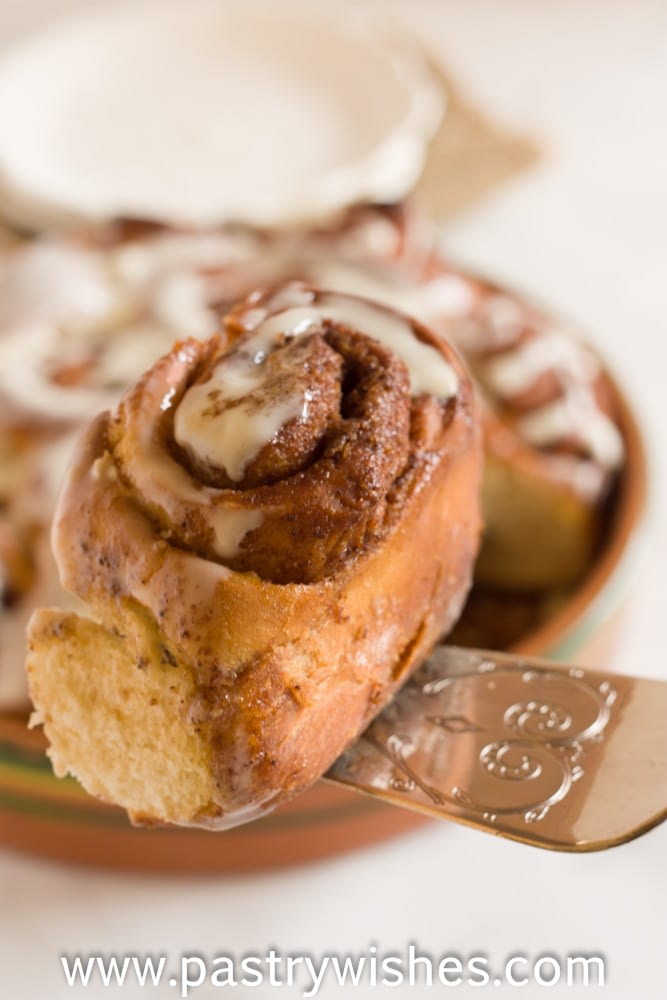 How to Proof Active Dry Yeast

Homemade cinnamon rolls are best the same day they are baked, but if there are any left the following day, you could easily reheat them! Simply microwave them for about half a minute.

Apart from the classic glaze and cream cheese frosting, these are some of my favorite toppings for cinnamon rolls:

I really hope you enjoy these cinnamon rolls!

Let me know how these cinnamon rolls turned out for you in the comments below! I’d love to hear from you!

* Rising times will depend on how warm and humid your kitchen is. For Overnight Cinnamon Rolls: Put the rolls in a pan, cover, and refrigerate overnight (you don’t need to wait to let them rise first). The next day, you’ll see that they have risen nicely! Let them rest at room temperature for about 10 minutes (you can do this while preheating your oven). Then uncover them and bake as directed.  © Pastry Wishes
https://mlsoesqucb0y.i.optimole.com/ORH1MWo-CbFshdpk/w:667/h:1000/q:auto/https://www.pastrywishes.com/wp-content/uploads/2020/02/cinnamonrolls4-6943.jpg 1000 667 Voula https://www.pastrywishes.com/wp-content/uploads/2019/12/pastry-wishes-new-.png Voula2020-02-13 20:05:132020-11-11 09:56:08THE BEST CINNAMON ROLLS FROM SCRATCH (+ Make-ahead Options) 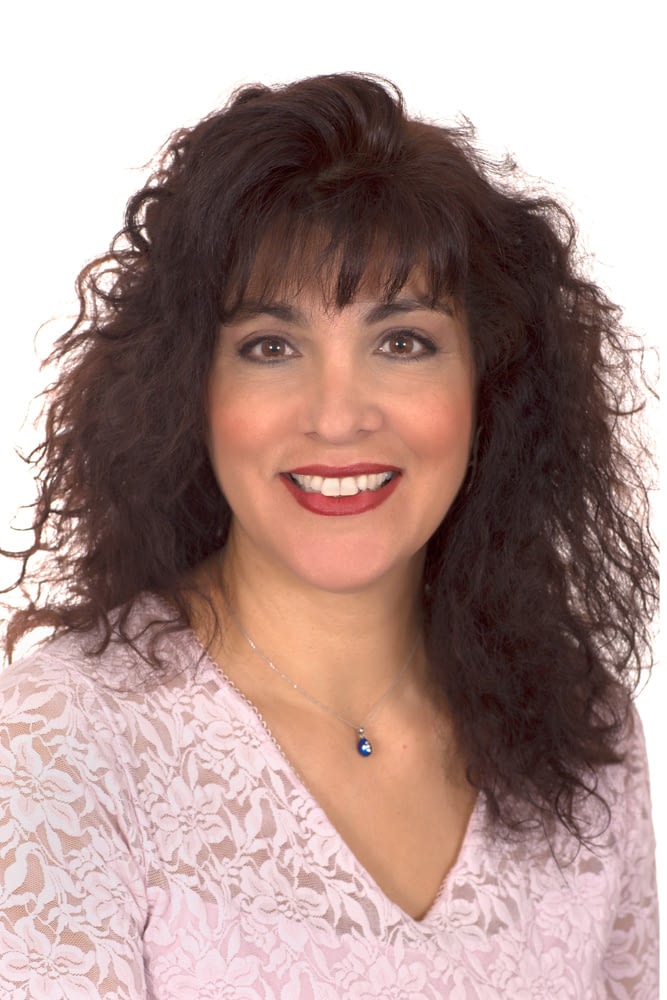