This simple, rustic vegan apple crisp is perfectly spiced with a delicious crunchy crumble topping! The ultimate fall dessert that the whole family will love!

This vegan apple crisp is a wonderful, comforting apple dessert with all the flavors of fall! It’s easy-to-make and only needs a few ingredients. It's definitely something that the whole family will go crazy over!

Apple desserts are a wonderful way to get into the fall season! For example, these streusel top apple muffins are amazing for breakfast and with coffee, in particular! When I'm in the mood for something elegant and fancy, but don’t want to spend the whole day in the kitchen, I make this gorgeous apple rose tart with dulce de leche ! It is so pretty and definitely a crowd-pleaser! On the other hand, when I want something sweet, but totally healthy and sugar free, these easy apple chips are perfect and you don't need a dehydrator to make them!

WHY THIS RECIPE WORKS

It’s low in sugar. I don’t like adding a lot of sugar to this crisp because I prefer using sweet apples. There are only 2 tablespoons of sugar in the filling!
It’s easy. This vegan apple crisp only takes about 5 minutes to prepare the ingredients before you bake it.
It's a perfect alternative to pie. As much as I love pie, this apple crisp is perfect for when you don't have time to make a crust!
This apple crisp is the perfect fall dessert for entertaining. This would be great for Thanksgiving or a dinner party, because you can easily double it to adjust the servings.
There are only a few ingredients needed. You only need 8 ingredients to make this recipe which you probably already have.
It’s vegan. There are no dairy or animal products, so it’s great for vegans and those who follow an Orthodox Christian fast. I promise you, though, even non-vegans will love this apple crisp!

WHAT YOU NEED TO MAKE VEGAN APPLE CRISP

Apples: I’m not a fan of tart apples, so for this recipe, I always use sweet apples, like Fuji or Gala. However, you could use tart apples if you prefer. You could even use half sweet and half tart apples. Depending on the variety of apple you use, though, you may need to increase the amount of sugar as this recipe doesn't have a lot of sugar.
Sugar: I use dark packed brown sugar for both the filling and the crumble topping because it gives a rich caramel flavor, but you could use regular white sugar, instead.
Apple juice: I use a little bit of apple juice, but you can just add orange juice or even water if you don’t have any apple juice. They both work great!
Flour: I use all-purpose flour for the crumble topping.
Spices: I use a combination of ground cinnamon and freshly ground nutmeg. You could also add a pinch of allspice if you like it spicier.
Rolled oats: I use regular rolled oats, not quick oats for the crumble topping.
Margarine/Vegan Butter: I use block margarine for this recipe, but margarine spread or vegan butter would work, too.

For extra flavor, here are a few ideas you may want to try:

HOW TO MAKE VEGAN APPLE CRISP

STEP 1
Peel and core the apples. Then cut them into ½ inch (about 1.5 cm) wedges. If you want smaller pieces, you can slice them into cubes, just make sure they are more or less the same size.

STEP 2
Mix the brown sugar, flour, nutmeg, and cinnamon and toss the mixture with the apples so they're all covered (I usually do this in the baking dish). Then spread them out so that they are in an even layer and pour the apple juice over the apples. If you want, you can cover the dish with plastic wrap to help prevent the apples from browning while working on the next step.

STEP 1
First, put all the topping ingredients in a bowl.

STEP 2
Then, stir everything together. I like using a spatula.

STEP 3
After that, just use your hands to combine everything together into large clumps. I like to keep some small clumps, too.

STEP 4
Then sprinkle the topping over the apples and bake!

What’s the difference between apple crumble and apple crisp?

Although both are very similar since both contain fresh fruit. The main difference, though, is the crumble topping. Crisps contain oats in the topping, whereas crumbles don’t. Nevertheless, I’ve seen both terms being used interchangeably nowadays.

Can this vegan apple crisp be made gluten free?

I think any apple you like can be used for this recipe, it’s just a matter of preference, really. I prefer sweet apples, but you could use your favorite variety.

How do you know when apple crisp is done?

The crumble topping will become golden brown. Also, if you pierce it with a fork, the apples will be really tender when they're baked through. You might also see some parts bubbling in the corners or on the surface, depending on the pan you use. These are the best indicators that the apple crisp is done.

Does apple crisp need to be refrigerated?

If I have leftovers, I always refrigerate this crisp after it comes to room temperature. It stays fresher for longer.

HOW TO SERVE VEGAN APPLE CRISP

Although this vegan apple crisp is delicious on its own, you serve it with a variety of yummy toppings! Here are a few ideas:

Let me know how this vegan apple crisp turns out for you in the comments below! I’d love to hear from you! 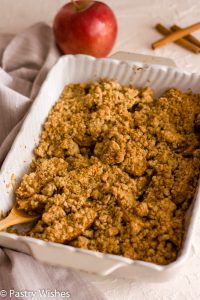 For the crumble topping

Picture Tutorial & Tips: I have a detailed picture tutorial in my post to help you out with each step of the recipe as well as lots of tips to ensure success. MAKE-AHEAD TIP You can easily freeze the crumble topping if you want to make it ahead. I spread it out on a tray and freeze it and then I divide it into portions and put it in freezer bags. You don’t need to thaw it before baking! ©Pastry Wishes

Thanks for stopping by! Let me know what you think: Cancel reply

This site uses Akismet to reduce spam. Learn how your comment data is processed.

I’m a self-taught baker, recipe developer, and aspiring food photographer with a passion for baking. Learn more about me...

We use cookies on our website to give you the most relevant experience by remembering your preferences and repeat visits. By clicking “Accept”, you consent to the use of ALL the cookies.
Do not sell my personal information.
Cookie SettingsAccept
Manage consent

This website uses cookies to improve your experience while you navigate through the website. Out of these, the cookies that are categorized as necessary are stored on your browser as they are essential for the working of basic functionalities of the website. We also use third-party cookies that help us analyze and understand how you use this website. These cookies will be stored in your browser only with your consent. You also have the option to opt-out of these cookies. But opting out of some of these cookies may affect your browsing experience.
Necessary Always Enabled
Necessary cookies are absolutely essential for the website to function properly. These cookies ensure basic functionalities and security features of the website, anonymously.
Functional
Functional cookies help to perform certain functionalities like sharing the content of the website on social media platforms, collect feedbacks, and other third-party features.
Performance
Performance cookies are used to understand and analyze the key performance indexes of the website which helps in delivering a better user experience for the visitors.
Analytics
Analytical cookies are used to understand how visitors interact with the website. These cookies help provide information on metrics the number of visitors, bounce rate, traffic source, etc.
Advertisement
Advertisement cookies are used to provide visitors with relevant ads and marketing campaigns. These cookies track visitors across websites and collect information to provide customized ads.
Others
Other uncategorized cookies are those that are being analyzed and have not been classified into a category as yet.
SAVE & ACCEPT